Rick Miller is a global speaker, author, leadership coach, and business advisor. For over 30 years, Rick served as a successful leader in roles including president or CEO in a Fortune 10, a Fortune 30, a startup, and a non-profit. Rick currently helps leaders at all levels grow into their true power and potential. His books, Be Chief: It’s a Choice, Not a Title and Casey’s Kite, offer simple and powerful leadership lessons for all ages. Rick’s proceeds from both books go entirely to charity.

Rick is often called a Chief not because of his many high-ranking titles, but because of his ability to bring out the best in others—and in himself. Primary among Rick’s toolkit is his Power Compass, a road-tested sustainable growth model he created over the course of his successful career, which he freely shares with the world and uses with his clients. The Compass helps people build their clarity, energy, impact, influence, and confidence.

Rick has been in demand for the past thirteen years as a confidential adviser to many of today’s most senior executives, and is extensively connected within the global business and leadership communities. Rick has also worked with many colleges and other educational institutions to share simple leadership lessons.

Few career business executives have proven they can deliver sustained next-level revenue and profit growth at different companies, of different sizes, in different industries, and in tough times. Fewer have a track record of growing leaders as a primary strategy. Fewer still are servant leaders who have demonstrated an ability to help other senior leaders grow their businesses and experience personal growth by drawing on first-hand experience from the front lines. And just a very few can also translate lessons from business into memorable leadership lessons that can help learners at any age.

Rick Miller is one of the very few.

Rick began his career in 1980 as a sales trainee in the tech industry working for Sperry Corporation. There he learned important lessons about relationships, accountability, and constant change. Rick developed skills as a turnaround specialist and rose to serve as a Division VP/GM for the North America Division.

Rick left Sperry in 1995 to serve as a Corporate Officer at AT&T, running a “long-lines” unit—he was AT&T’s first outside recruit for that position in 100 years. Rick’s team tripled the growth rate to 15% and held it for three years as they built a robust $5B unit. Rick was then promoted to President of Global Services.

In 2000, Rick was recruited by the internet start-up, Opus 360, to serve as President and COO. During the market crash of 2000, Rick’s team completed a successful IPO while dramatically increasing revenue and profit.

Then in 2002, Rick was recruited as the first hire of a newly-appointed Lucent Technologies CEO to turnaround sales at the $21B telecommunications provider. After the company returned to profitability, Rick was asked to serve as President of Lucent’s Government unit, which became the fastest-growing unit at Lucent for the next three years.

During this period, Rick also led the non-profit organization, The Balance & Stretch Center. As President and CEO, he led the development of products used by other non-profits to help children with diabetes.

Since mid-2008, Rick has worked with senior leaders across many industries including hi-tech, pharmaceutical, manufacturing, automotive, media services, financial services, and in non-profit organizations. First at Choices & Success LLC and now at BEING CHIEF LLC, the result is always growth.

Rick also works with the Weatherhead School of Management at Case Western University. Specifically, as a Senior Advisor to The Strategic Innovation Lab at The Fowler Center for Business as an Agent of World Benefit, Rick offers counsel to engage the business community in programs that lead to sustainable long-term growth.

Rick earned a bachelor’s degree from Bentley University and an MBA from Columbia. He currently lives in Morristown, NJ.

END_OF_DOCUMENT_TOKEN_TO_BE_REPLACED

Rick In the Media 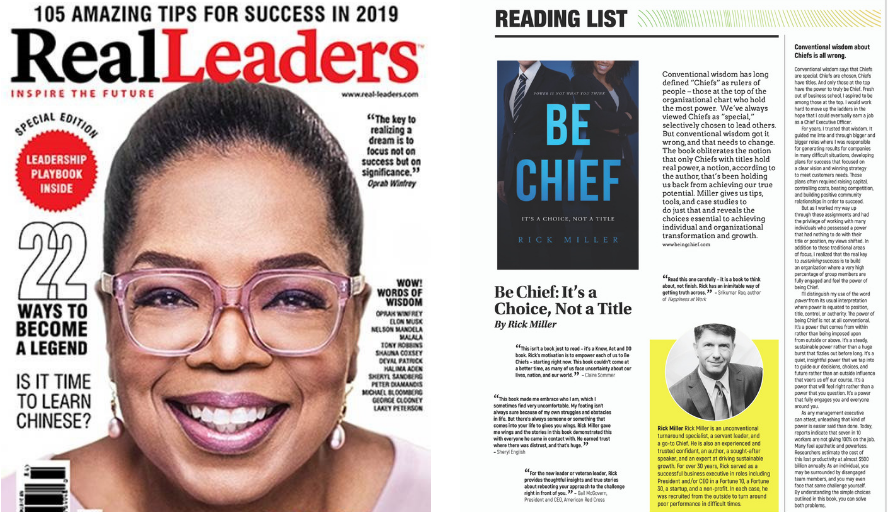 Do You Know When to Quit? The Answer Lies in These Two Costs Business 2 Community, December 2018

Interview: Rick Miller Author of ‘Be Chief: It’s A Choice, Not A Title’ Blog Critics, October 2018

What Is Power, Really? Forbes.com, October 2018

5 Ways A Leader Can Learn More About Themselves Skip Prichard’s Leadership Insights, October 2018

What Does It Really Mean to Be Chief? Forbes.com, October 2018

The CEO’s Challenge with Change The CEO Magazine, September 2018

Confessions from a Fortune 50 Expert: Five Lessons I Learned from a Six-Year-Old CEO World Magazine, September 2018

The Power Inside Each of Us ThinDifference.com, September 2018

Working in the Key of Change Bentley Magazine, May 2018

This Week in America, December 2018

Get Down to Business, October 2018

Leading in a Storm Empower Me Magazine, November 2016

The 5 Elements of Effective Leadership MWorld, The Journal of the American Management Association, September 2014

10 Ways to Build an Adaptive Culture in Your Organization Vistage.com, October 2013

How a Growth Roadmap Drives Financial and Personal Growth in Turbulent Times The Wealthy Business, October 2013

So You Want to Be a CMO Direct Marketing News, September 2013

There are Marketers and Chief Marketers: Which are You? CommPro Marketing August 2013

How Coachable Are You? MSN Business, April 2012